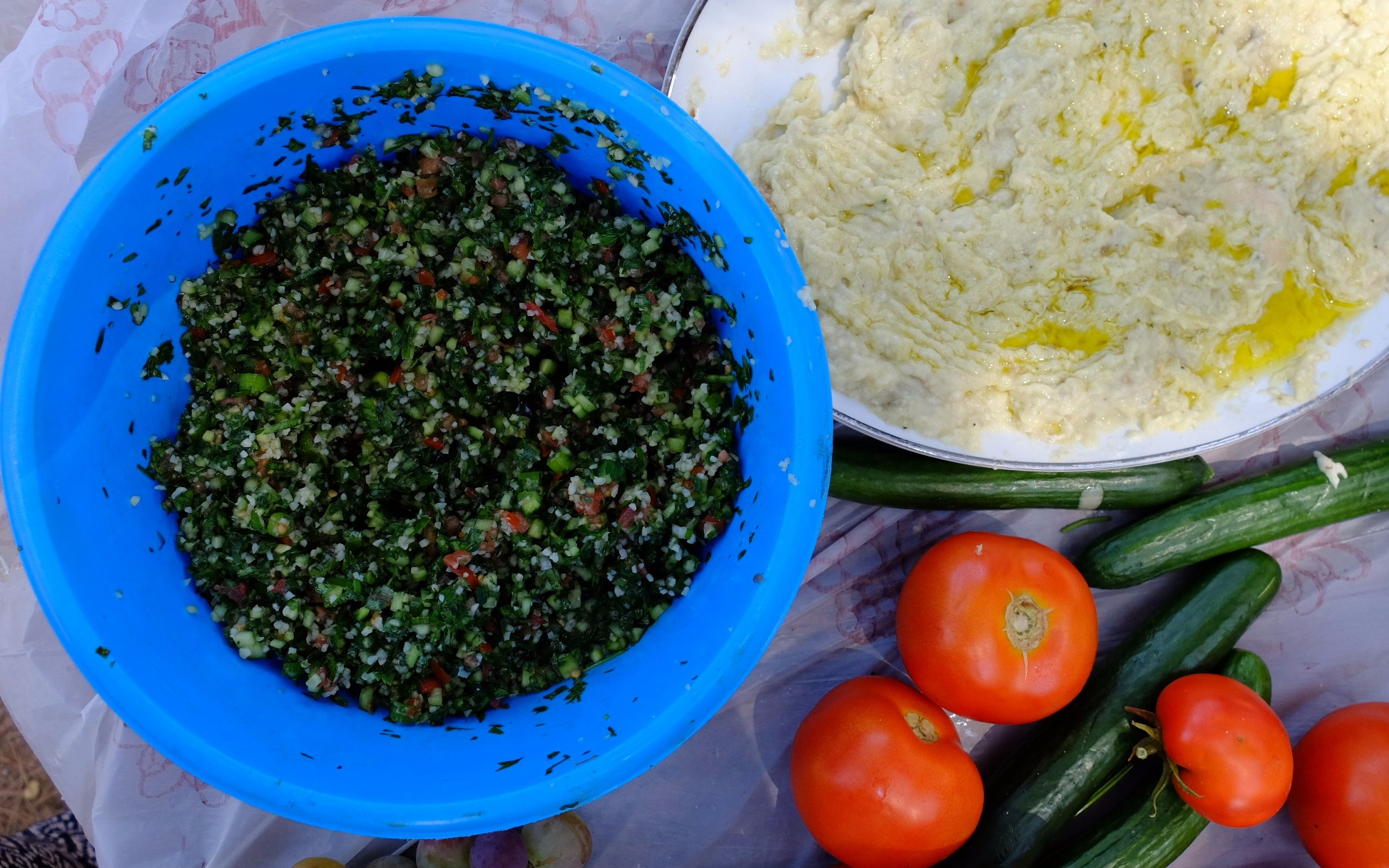 Tabbouleh (tabūlah or tabouleh) is one of my favourite Middle Eastern salads. In Europe, it's sometimes known as ‘Lebanese tabbouleh’ because what Europeans call 'tabbouleh' would not be considered as proper tabbouleh by people in Palestine, Lebanon or anyone else from the Levant region. In Europe, tabbouleh's main ingredient is often couscous or bulgur wheat while the proper way to make it is to pack it with finely chopped parsley. While this green lemony dish is eaten everywhere in Palestine, some people say it is especially delicious in Nazareth and the Galilee region in general.

When I visited Nazareth - a mainly Arab city in the north of Israel - I spent some time with Faten, an energetic Palestinian actress who splits her time between her native Nazareth and Ramallah in the West Bank. I'd describe Faten as an intellectual and a Palestinian rights activist. She does a lot of work around the understanding and preservation of Palestinian cultural heritage, including in her field of acting. So I had some fascinating conversations with Faten about food and identity questions for Palestinians living inside Israel or what is also called 1948 Palestine. She also took me around Nazareth to talk to people about Palestinian food culture inside Israel. By the time I arrived Nazareth, I had already spent over a month in the West Bank, meeting and cooking with people all over the Occupied Palestinian Territory in places like Bethlehem, Hebron, Nablus and Jericho. In the West Bank, the Palestinian identity is omnipresent visually and orally but inside 1948 Palestine (Israel), it surprised me how subdued it seemed, including around food. For example, many people, at home and in restaurants, described their food or menus as Arabic, not Palestinian. Faten told me she felt there was "something heavy about the Palestinian identity within Israel, “it’s more hidden here” she said.

"There is something heavy about the Palestinian identity within Israel. It's more hidden here."

Palestinians inside Israel - often referred to as the Arab population of Israel or Arab Israelis - amount to nearly 1.8 million people which is about 20% of Israel’s total population. They are the descendants of the 150,000 Palestinians - Christians and Muslims- who either stayed in their towns and villages when the new state of Israel was declared in 1948 or managed to come back across the new border after having fled their hometowns during the 1948-49 war. Today, Nazareth is considered the unofficial capital of Israel’s Arab population. Most of its inhabitants are Arab Palestinians, with a small Jewish Israeli minority living in a separate neighbourhood. This gives Nazareth a distinct vibe which is quite different from the rest of Israel. The language is Arabic, the arts and craft are Palestinian and the food is Arabic, or more precisely Palestinian.

Nazareth has become a paradise for foodies. The city known as Jesus’ hometown is now famous for its new take on traditional Arabic food. I went with Faten to meet Ehsan, co-owner Tishreen, one of the trendy fusion restaurants that has popped up around the old city. Ehsan explained how many culinary hotspots in Nazareth offer typical Middle Eastern dishes with a twist. He told us that Tishreen’s menu was not Palestinian but Arabic (or Al-Sham as the Lebanon-Jordan-Syria-Palestine region is called). But fifteen minutes into our conversation, Ehsan acknowledged that some of their recipes do stem from typical Palestinian home-cooked food like msakkhan. Other dishes are new inventions or modern takes on traditional Palestinian cuisine. And then you have the classics like hummus and tabbouleh. Ehsan shared with us his trick for tabbouleh: “Parsley has a lot of water in it so the secret to a perfect tabbouleh is to cook the bulgur a little but not completely, and then put it with the chopped parsley so the bulgur soaks up the water from the parsley. It dries up the parsley which can then really soak up the olive oil.” And he is right, this works wonders.

Tabbouleh is amazing as a side salad or just on its own so adjust the quantities according to how you serve it. This quantity works as a side dish for 4 to 5 people. Preparing tabbouleh involves a good amount of chopping so make sure to have a good knife and chopping board at hand!

A dessert recipe from Nazareth is available here.

Tabbouleh is even better if left to rest a couple of hours in the fridge before serving it.