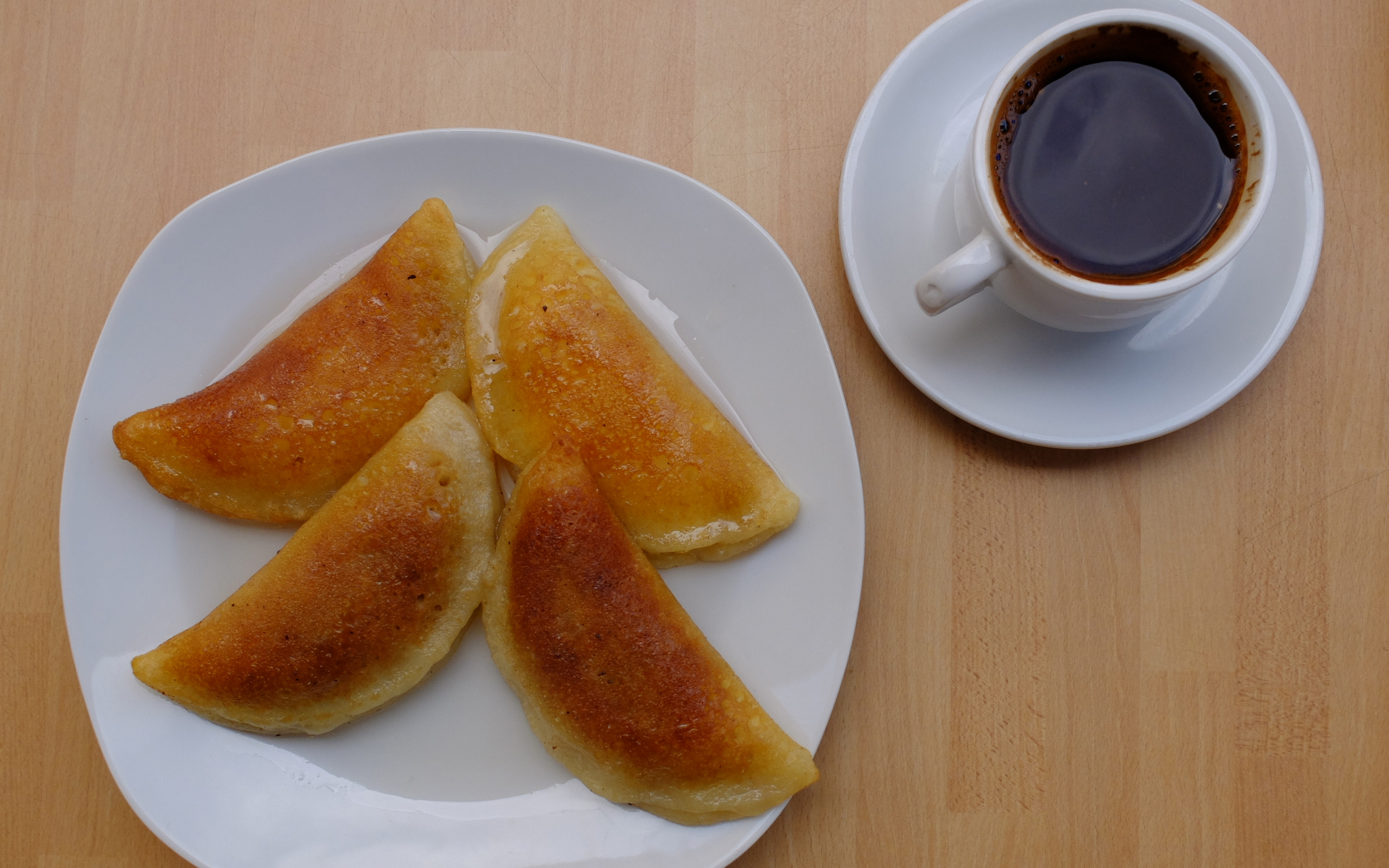 Qatayef - or atayef - are small Arabic pancakes stuffed with nuts or cheese and covered with sweet syrup. I first tried them in Nazareth, the largest Arab-Palestinian city in Israel (1948 Palestine). The staff at my hostel sent me to Abu Ashraf’s famous cafe in the heart of Nazareth’s old town - he is known for making the best qatayefs in town, and indeed, indulging on Abu Ashraf’s crunchy syrupy pancakes is an experience not to be missed.

Qatayef are the best pancakes I have ever tried. You can fill them with cheese, nuts or whatever sweet mixture tickles your fancy. In the Levant, they’re usually eaten as a holiday treat, especially during Ramadan. Ramadan is one of the holiest times of the year for Muslims. It’s a month of fasting and reflection observed by Muslims in Palestine and across the world. And a time for eating qatayef. They’re a great way to break the fast or just fill your stomach to keep you going until your next meal. As a friend told me: “Ramadan is the qatayef season!”. The majority of the population in the occupied West Bank is Muslim - it is estimated that 80 to 85% of people are Muslims while about 1 to 3% are Christians (see the CIA World Factbook). The Christian population in the West Bank (and the whole of historical Palestine) has been steadily declining over the last decades while the West Bank's Jewish population has increased rapidly since Israel’s occupation of the Palestinian territories in 1967 (West Bank, Gaza & East Jerusalem). Indeed, nearly all Jewish people in the West Bank are Israeli citizens living in illegal Israeli settlements.

In Bethlehem there is a famous bakery specialising in qatayef which gets very busy during Ramadan. If you’re ever there, ask for Mahsiry Qatayef shop on Hebron Road. If you are in Nazareth, head to Abu Ashraf’s cafe, Dewan Al-Saraya, located in the old town. Abu Ashraf is a lovely man who has collected family objects from all over Palestine and crammed them into his little cafe. He’s full of stories and knowledge about Nazareth and makes delicious qatayef all-year round (not just during Ramadan). It’s also a chance to get lost in the narrow cobbled streets of Nazareth’s old town, wander through its souk, talk to Palestinians and understand the complex mark-up of this historic city. Nazareth is home to many internally displaced Palestinians and their descendents. The town was somewhat spared from the destruction and ethnic cleansing carried out by Zionist forces most Palestinian cities and villages endured in the wake of the creation of the State of Israel in 1948. This meant that many Palestinians who were forced to flee their homes found refuge there and stayed, making it the largest Palestinian city inside Israel today (here is an interesting piece about Nazareth in 1948 and today).

When I met Abu Ashraf, I cheekily asked asked him for his qatayef recipe but he just smiled and told me it was a secret. So the recipe below is not Abu Ashraf’s one but it’s an adaptation of recipes recommended by Palestinian friends and how I think Abu Ashraf’s qatayef tasted like. Some people make the dough with milk, others with water only. This one is with water so it’s vegan-friendly (just skip the version with the cheese filling obviously). In Palestine, you can buy already-made qatayefs in many shops and bakeries - especially during Ramadan - but you can also prepare them from scratch which is even tastier and not difficult. All you need is a bit of time.

Check the tabbouleh entry for another recipe & story from Nazareth

For the pancake dough

For the filling For vegans, skip the cheese and just double the dose for the nut mix below (including the sugar & cinnamon)

Start with the syrup as it needs to cool down. In a saucepan, heat 250 ml of water with 215 grams of sugar. Bring to boil, stirring occasionally to make sure the sugar dissolves. Add 2 teaspoons of lemon juice and simmer on medium to low heat for 12 to 15 minutes, stirring occasionally. It will thicken slightly. Turn off the heat, mix in 1 teaspoon of orange blossom water and leave to cool (note that you can keep the syrup for weeks if transferred to a closed container).

While the dough is resting, prepare the fillings. For the cheese filling, simply chop your cheese into small pieces and set aside. For the nut filling, mix the chopped walnuts and almonds with 1 heaped tablespoon of sugar and one heaped teaspoon of cinnamon. Set aside.

If you’re baking the qatayef, preheat your oven at 180 °C now. 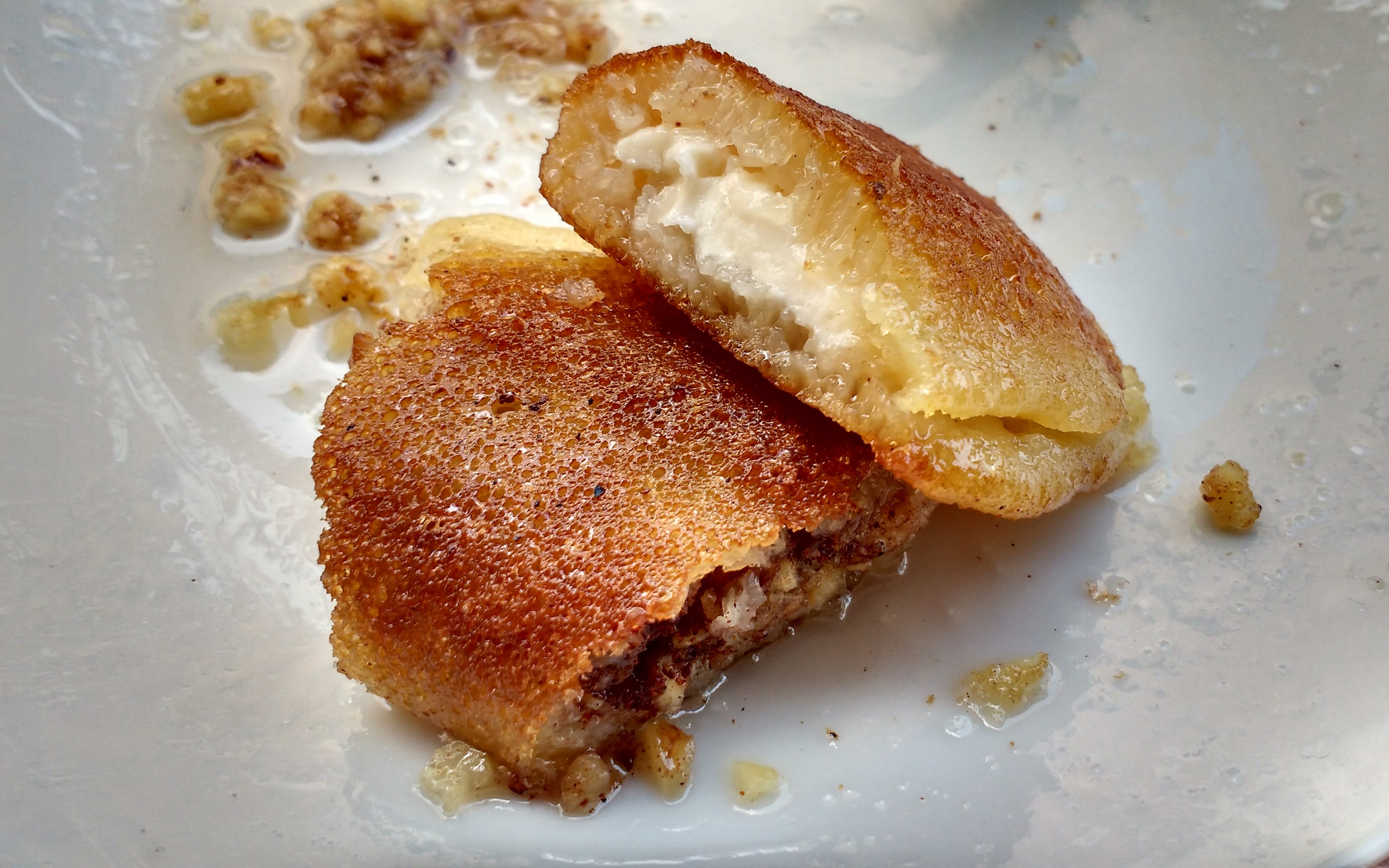