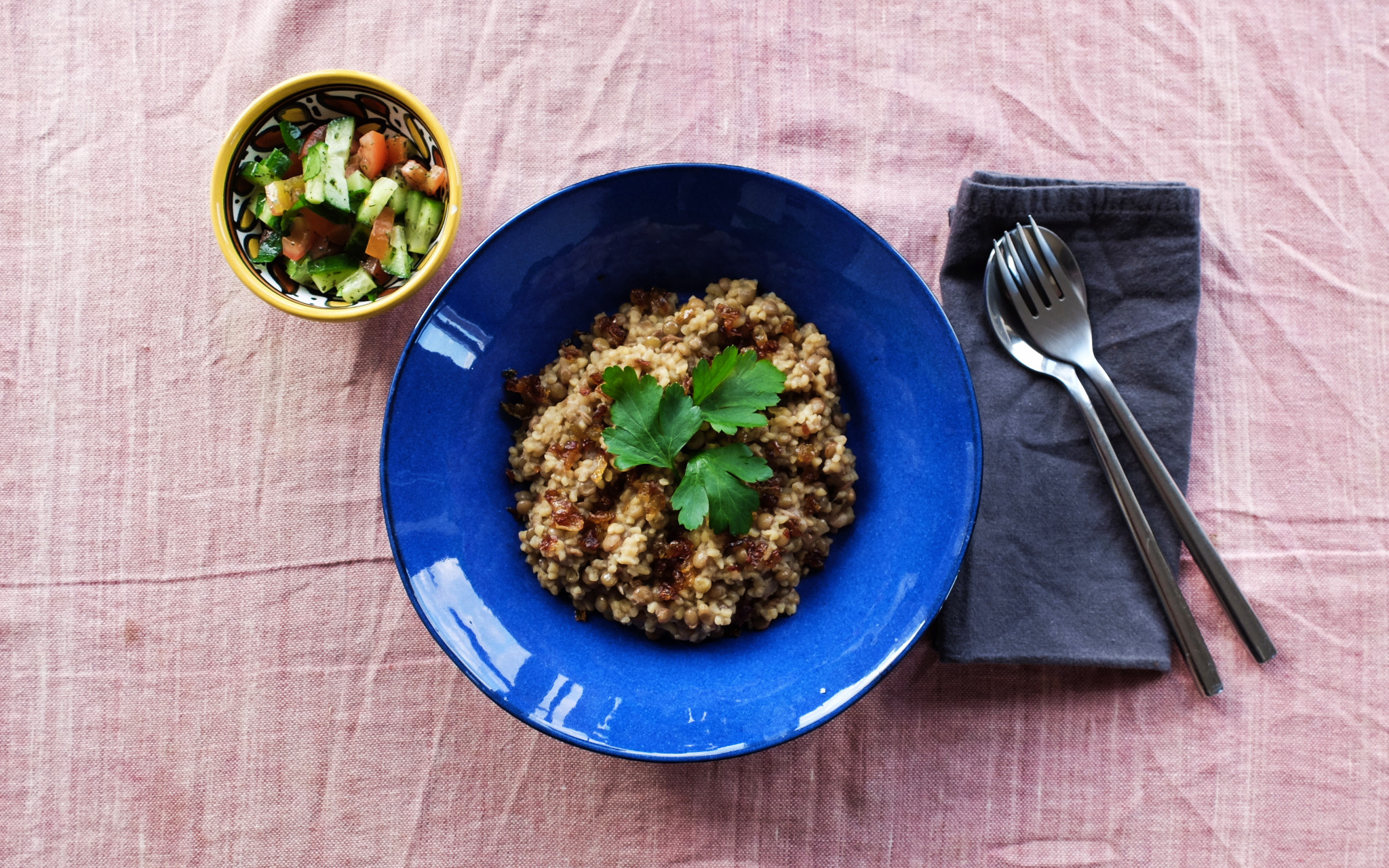 This recipe is based on the mujaddara served at Ein El Wadi, a family-run restaurant in one of the main Palestinian neighbourdhoods of Haifa, in Israel (1948 Palestine). Mujaddara is considered the ‘poor man’s food’ in Palestine because of its cheap and staple ingredients: rice or bulgur, lentils and onions. But don’t underestimate this dish: the caramelised onions and the hint of cumin give the mujaddara a strong wholesome flavour and once you start eating it, you cannot stop. At Ein El Wadi, the mujaddara is made with coarse bulgur (burghul in Arabic), which I prefer to rice for its nutty taste. It’s also more traditional, as bulgur was once the main cereals eaten in the Middle East before rice arrived.

Ein El Wadi is one of the restaurants in Haifa that takes pride in serving authentic Arabic food. The parents and son trio who run the restaurant label their cuisine Lebanese. I asked Tony, the son and main cook, why they called their menu Lebanese, and not Arabic or even Palestinian. He told me Lebanese cuisine is richer and more famous. He explained that even though some things on the menu are traditional Palestinian dishes (maqluba and msakkhan), the rest is overall Arabic so they prefer to call it Lebanese. The restaurant is popular with Israelis, Arab Israelis (Palestinians who live inside Israel) and the many tourists who flock to Haifa throughout the year. I wonder, would it be as popular if it were marketed as a Palestinian restaurant?

This is one of the questions I asked Nadem when I met him in his office at the Haifa-based NGO Baladna. Baladna works with young Arab Israelis (Palestinians inside Israel), promoting the Palestinian identity from a historical, political and cultural perspective. Nadem explained that before 1948 (when the State of Israel was declared), it was fairly easy to travel between present day Lebanon, Jordan, Syria and historical Palestine. It was all seen as one region called Bilad Al-Sham (meaning land to the north) and trading and travelling across this region was commonplace. The food across Bilad Al-Sham was also quite similar, and still is today, so it’s easy to label the food simply as Arabic. But there is something more to this reluctance to label something as ‘Palestinian’. 'Arabic' is a cultural identity, it’s not threatening to the Israeli ideology, but 'Palestinian' is seen as a political identity so it is threatening, Nadem told me. It could even be bad for business to claim to serve Palestinian food.

According to Nadem, the Palestinian identity inside the state of Israel is more and more under attack. Since the 70s ther has been a deliberate effort by the Israeli government to increase sectarianism among the Palestinian Arabs (especially among Muslims, Christians and also Druzes, an Arabic-speaking religious community living mainly in Syria, Lebanon, Israel, and Jordan). This is slowly fragmenting the Palestinian community, making it more difficult for them to fight for their identity and their rights as equal citizens. And this is much needed for Palestinians inside Israel. As one of the founders of the Palestinian Al Yakhour hostel in Haifa explained to me, “We (Palestinians) are second class citizens in Israel. It’s a racist state. I have lots of Jewish friends but it’s the government and the zionist movement. You feel it at university, you feel it when you try to get a bank loan, in cities that are not Palestinian you are not served in the same way.”

In Haifa, it is clear that the predominant culture and identity is not Palestinian, despite the large Palestinian population living there. You see no Palestinian flags, unlike the West Bank. The Israeli Jewish identity prevails. But Haifa is and was Palestinian too, and many Palestinians inside the West Bank dream of coming to this beautiful city to watch the sea from Mount Carmel where the famous Bahá'í temple stands. Thousands of Palestinian refugees, in Palestine, Lebanon, Syria and farther away, also dream of coming home to Haifa, where their parents or grandparents came from, but fled when the state of Israel was declared in 1948. It holds a special place in many people’s hearts.

So I declare this mujaddara recipe to be Palestinian, from Haifa. Words matter.

The view from the Bahá'í temple in Haifa