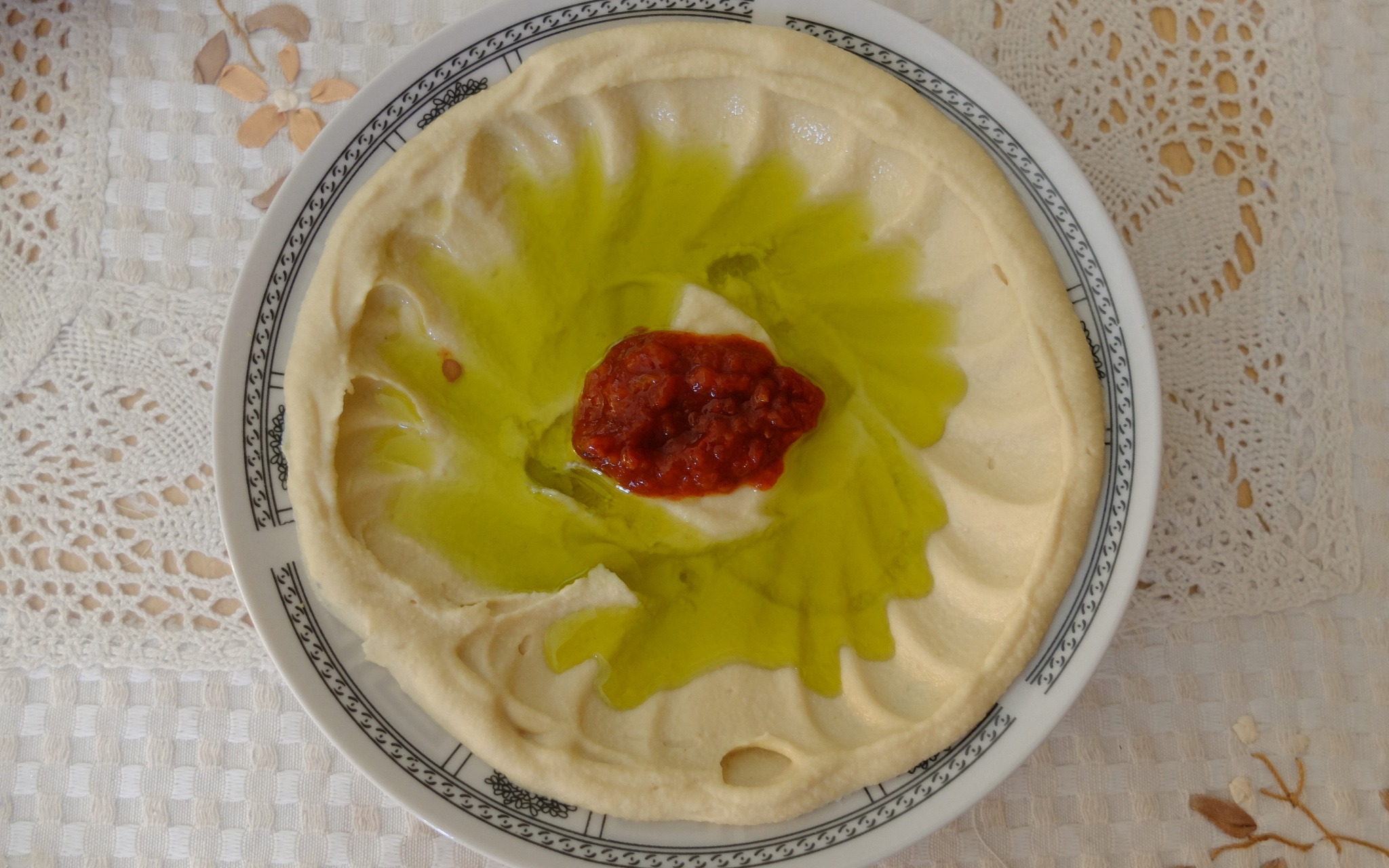 Anyone who has travelled to the Middle East knows that hummus is a staple food there. In Arabic, hummus means chickpea. Chickpeas are cheap, pretty healthy and easy to find in many parts of the world. Once cooked and mashed, they can be turned into this famous dip we call hummus. In Palestine, you’ll get hummus for breakfast, lunch, dinner, as a main or side dish. It’s tasty and filling. It’s also quick to prepare unlike many other Palestinian recipes which often need more time and patience.

This hummus recipe comes from Fidaa and her mother Jamila who live in Dheisheh camp, Bethlehem’s largest refugee camp. We prepared it alongside other delicacies like falafels for a typical Palestinian breakfast. It wasn’t the first time I cooked with Fidaa and Jamila. I first met them when Jamila showed me how to make maqluba, Palestine’s national dish. From then on, I spent a lot of time with them. Not only were they my neighbours when I lived in Dheisheh, but they also welcomed me into their home with open arms and treated me like a family member.

One of the major impacts of the Israeli occupation on Palestine's food culture have been Israel’s efforts to claim ownership over Palestinian cultural customs, including food like hummus.

Hummus and falafel are dishes that spark some of the most heated discussions around food and identity in Palestine. Although it’s hard to pinpoint the exact ancient origin of hummus, it’s been prepared and eaten in the Middle East for hundreds if not thousands of years. Hummus is Palestinian, Lebanese, Jordanian, Syrian, Egyptian. Everyone in the region makes it and eats it, including Israelis. But who owns it is the source of much indignation. When I was talking about food and politics with Fidaa, she told me that one of the major impacts of the Israeli occupation on Palestine's food culture have been Israel’s efforts to claim ownership over Arab or Palestinian cultural customs, including food. “They also steal our traditional food, and say this is for them and not for us”, Fidaa said. Indeed, there have been claims that hummus is Israeli without recognising its origins, which enrages Palestinians (and Lebanese people alike). Of course Israelis eat and make hummus, but it’s pretty safe that hummus existed in Palestine well before the State of Israel was founded in 1948.

Fidaa was not the first or last person to talk to me about hummus or falafel in terms of cultural appropriation. It may seem trivial in the context of displacement, occupation, conflict, violence and poverty to fight over who owns which food, but for people who have been forcibly displaced and have been living under foreign occupation for half a decade, cultural heritage matters a great deal. It’s about identity and memory and Palestinians often lament that Israel didn’t just take their land, but is also taking their traditions and heritage.

Politics aside, hummus is a versatile and tasty dish, and it’s great for vegetarians and vegans alike. There are many ways to make and serve it. Smooth or chunky. Served warm or cold. Topped with paprika, chilli sauce, fried mushrooms or even minced meat. There is also fattet hummus, served on fried bread with a yogurt tahine sauce (here is a recipe for fattet hummus). This easy recipe will get you whipping up your own hummus in no time.

The soaking and cooking of the chickpeas require very little effort and attention so the real 'cooking' time is just 15 minutes. Making hummus with canned chickpeas will never be as nice and what it’s meant to taste like - making it from dried chickpeas is easy, you just need to think ahead.

Serve it warm with arabic bread or eat it cold later. It keeps in the fridge for a couple of days.