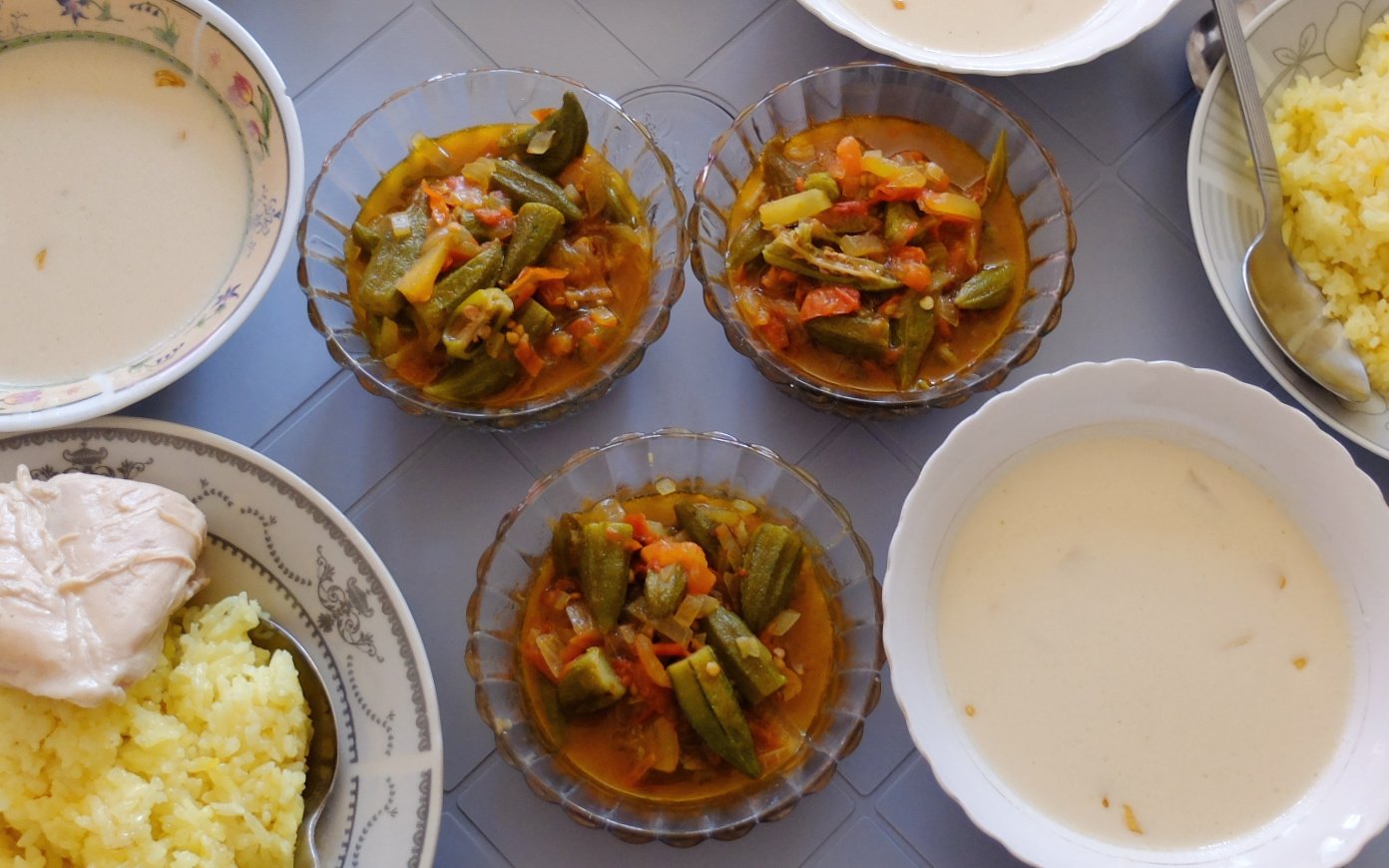 Bamieh - okra in English - is a common dish across the Middle East and Asia. In the Levant, including in Palestine, bamieh is often cooked in a stew with tomatoes, with or without meat. Arwa’s bamieh recipe is the vegan version. It’s healthy and easy to prepare, and popular during fasting periods for Muslims and Christians alike. If you prefer the meat version, check out Randa and Nadera’s recipe for bamieh with lamb.

Speaking to Arwa on the phone on my way to her house in Tel Rumeida in Hebron, she warned me the Israeli soldiers who control the coming and goings into her neighbourhood might not let me in. As we got closer to Tel Rumeida, even my taxi driver seemed nervous and dropped me a few 100 metres away from the checkpoint, out of sight from the Israeli soldiers. But I walked through the checkpoint swiftly, no questions asked, unlike Arwa’s neighbours who the day before were searched and questioned before being allowed through the checkpoint to go home.

Tel Rumeida sits on a hilltop overlooking Hebron, one of the West Bank’s largest cities. Hebron is the only city in the West Bank with Israeli settlements inside Palestinian neighbourhoods. The presence of 500 to 800 Israeli settlers inside Hebron’s old city and the thousands of military men and women there to “protect” them has created an oppressive system of movement restrictions, checkpoints, expulsions and violence. Some streets are off-limit for Palestinian residents. Many shops have been closed down and Palestinian families have had to move out - the old city, vibrant only a few decades ago, is almost a ghost town. In Tel Rumeida, about 40 Israeli settler families live next door to Palestinian residents and parts of it have become a closed military zone, only accessible by foot via checkpoints. This is where Arwa lives.

“I’ll never forget that day. I call it the grey day”, Arwa said about the day a small number Israeli settlers arrived in Tel Rumeida in 1984 and set up camp next to her family’s home. She was 11 years old. Since then it’s been a long fight for her and her family. Her parents’ house have thick metal nets on their windows to protect them from the stones settlers often throw at them. Arwa, who has a black belt in karate, often welcomes foreign visitors and takes them to her parents house to see the reality of living in Tel Rumeida. She’s very active in the Palestinian peaceful resistance movement, and fights especially against the land grabs, attacks and restriction of movements in Tel Rumeida: “I am willing to resist in any way where there is no blood in it. I am very clear in this point. I am against blood from anywhere, from any side. What happened to us as Palestinians has been an international decision, sorting it out it has to come from the international community. Otherwise it won’t work. I still have hope, I have a dream. Inshallah.”

Photos (left to right): Arwa in Tel Rumeida, a closed military zone; the view from her family home, through their window metal nets; Hebron's old city, in parts a ghost town

Arwa loves cooking. She can make lots of different dishes, not just Palestinian. She also wants to eat healthy so changes the traditional Palestinian recipes a little, and often cooks without meat (her British husband is vegetarian). Shopping for food it’s not always straightforward for them. There is a small shop just down the road from her house which sells basics like flour and rice. But for vegetables, fruits and meat you need to pass the checkpoint and you never know how long that could take. So you need to plan well. And keep food in your freezer.

Read more about Arwa’s family story here. You can also find out more about Hebron on the TIPH website , and if you are in the region, you can join one of Breaking the Silence's Hebron tours with Israeli ex-soldiers.

Arwa served her bamieh as a side dish next to chicken and rice but many Palestinians eat bamieh as a main dish with warm Arabic bread.